Weather in Gran Canaria is highly predictable. Most of the time it is sunny, and around 20ºC. Average temperature in winter is 17ºC and in summer it is 25º. It's been chosen as the best climate of the world by the American Syracuse University. This doesn't mean that we never have bad weather. We do, but luckily it rarely lasts for more than a day.

Gran Canaria is known as "the miniature continent" due to the different landscapes and climates that can be seen together. There can be differences of three or more degrees between the north or center of the island, and the southern part. There is a mountain range in the center of the island, that prevents clouds from going towards the south during the summer. That's why the southern part is always warmer than the northern part of the island. This is more evident during the months of July and August, when clouds block the sunshine. These clouds are known as "panza de burro," which means, "donkey's belly" because of the light gray colour of the clouds.

In the winter months it is a good idea to bring a sweather and a light rain coat. It usually never rains two days in a row. It rarely goes below 14ºC during the winter months in the areas near the sea. Although this may seem not very cold to you, it is. The feeling of "coldness" is high due to the humidity on the island, and most Gran Canarian wear sweaters or coats during January and February, to protect themselves from the cold wind.

Twice a year there is a "heat wave," during which temperatures rise above 30ºC. This heat wave is caused by hot air flowing from the Sahara. It is best to stay in the shade during these days, and drink plenty of liquids.

Winter: What to Wear

Winter in Gran Canaria can be tricky for visitors who come from very cold climates. Many tourists don't take the proper precautions. They check the weather on the internet before they travel, and see that it is something like 17ºC, and say to themselves, "that's not bad".

Due to the humidity, temperatures like 16-17ºC, give the feeling of being very cold, so you will need a jacket, or coat, especially in the night. During the day, if days are sunny, 20-22ºC is normal, but you will still need full sleeves clothing and a jacket or sweater. If you stay in the capital, it will be colder than the southern part, where some years, you can get away with a thick sweater during the night, too.

We have few cold fronts that cross the whole archipelago. If you're unlucky and it rains, don't worry, because the cold front generally takes a whole day to cross the island. It is rare to have to very rainy days in a row, even in the winter. Umbrellas cost 3 euros in the Chinese guys' shops, so travel light!

Here's what to expect:

January - cold 17ºC in the night time. The day time depends on weather it is raining or not, but a sweater will generally do if you're staying in the south of Gran Canaria.

February - cold, can rain all over, and snow in the mountains, and yet be sunny in the beaches. Quite unpredictable, so be prepared. There have been years with no rain at all, or very little.

March - cool, can rain, sweater will do.

The spring weather in Gran Canaria is generally sunny/cloudy. You really don't have to be worried about the cold, but there can be light showers on certain days. 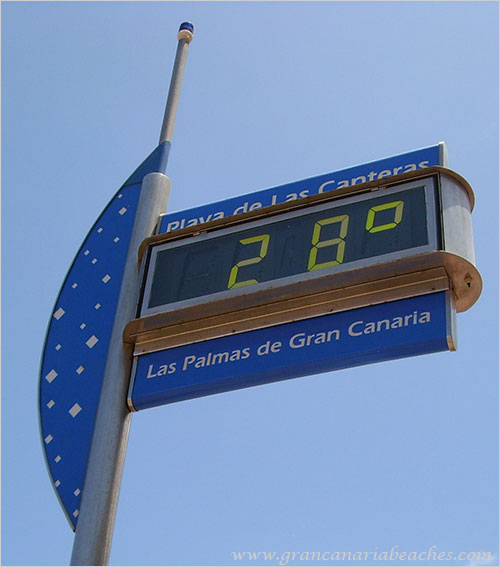 A picture of one of the clocks that also tells the temperature on Las Canteras beach in the capital of the island, Las Palmas de G.C. The photo was taken in July 2014.

Summer in Gran Canaria is hot, but never as hot as islands in the Caribbean. Hats (on the beach), short pants, and T-shirts are recommended, which you can buy at discounted prices in the summer sale that starts at the beginning of July.

July - hot, but hotter in the south and the center of the island when it is sunny. In the capital, Las Palmas, clouds keep the days cooler.

August - hot/ very hot, although not always sunny in the capital of Gran Canaria, Las Palmas

September - Very hot and sunny all over Gran Canaria! Possible heat wave. Yes, it sounds weird, but September is very hot in Gran Canaria. So if you like temperatures around 30ºC, that's your month.

Autumn really is the continuation of summer, as the weather stays warm, around 24ºC, and at the beginning of December, it starts to get cold, and you can't wear short sleeved shirts any more.

December - Temperatures start to cool down, and long sleeved shirts are needed in  the capital. In the south of the island, on sunny days, t-shirts still can be worn. At night it gets cold and you most probably will need a sweater.

Return from Weather in Gran Canaria to Home Page