The Vegueta district is the birthplace of what is now Las Palmas de Gran Canaria. In 1478, the first Spanish settlement, called "Real de Las Palmas" was set up on the right side of the Guiniguada ravine. Its original function was to serve as a military base.

After more than five hundred years, this district of the city still is the most important area of the city's historical heritage. This district is prospering, with plenty of things to do, like go to the theatre, attend musical events, and try great food.

The city council has started a program to boost the economy, by taking advantage of the combination of the great food of the island with the bucolic setting of Vegueta. Every Thursday evening, you can join the delicious tapas route in this area, which takes you to different bars and restaurants. Other areas in Gran Canaria have also successfully implemented similar routes.

In November, “Don Juan Tenorio,” which is a Spanish play, written by Jose Zorrilla in 1844, is performed on an open-air stage in Vegueta. This play is about the passions, adventures, and relationships of a Spanish nobleman. It is organized by the City Council.

What to See in Vegueta: A Journey Back in Time

Vegueta is the place where you will find the oldest buildings in town, and where you can easily spend a couple of hours sightseeing. Many of the streets have been closed to traffic. It is worth walking down the cobblestone streets, and see the wooden balconies of many of the buildings. Another interesting thing to see, are the large patios of the buildings, full of plants, kept just like they used to be, hundreds of years ago. 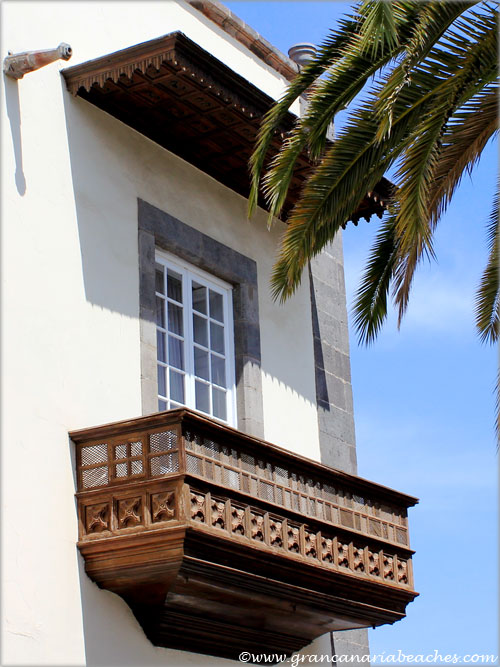 It is very common to see wooden balconies here.

A great place to start out your route is the Plaza de Santa Ana, which is the main square, where many people feed the pidgeons. This big square was built in the sixteenth century and was the center of all the religious and government activity of the town. Here, you will also see the statues of eight Canarian dogs made of bronze, built at the end of the nineteenth century. Cultural and musical events are held in this square, various times a year. 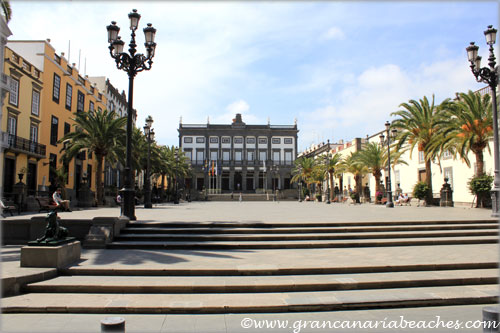 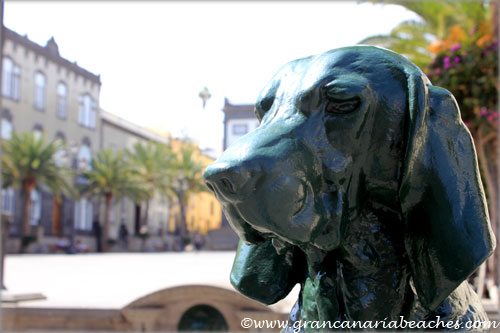 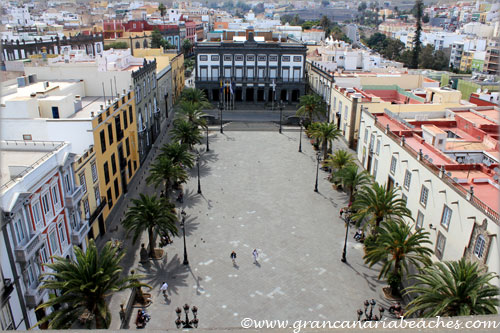 Surrounding this square, you will find the old Town Hall building (Casas Consitoriales) which were used until 1979, the bishop’s office, and the Cathedral.

The Cathedral’s is a must-visit landmark of Vegueta. It has different architectural styles (Gothical in the inside, Neoclassical on the outside), as it took many years to build. Building started in 1497, then in 1570 they ran out of funds. Building work resumed in 1781. There is a viewpoint in one of its towers, where you can see the whole city (highly recommended). If you look the other way, you can see the main square. On one side of the cathedral, in the “Patio de los Naranjos”, there is a religious art museum (Museo Diocesano de Arte Sacro), where you can see paintings of the 17th and 18th centuries, as well as religious figures. 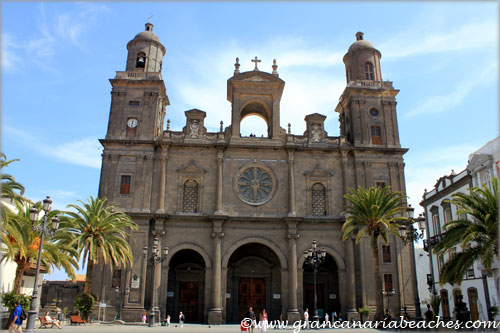 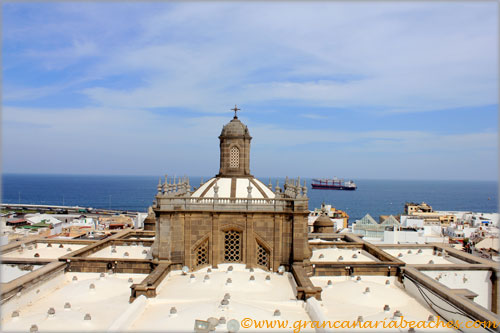 View from the roof of the cathedral

Here, you will also find three of the most important museums of the island, all owned by the Cabildo de Gran Canaria, which is a government body of the island: 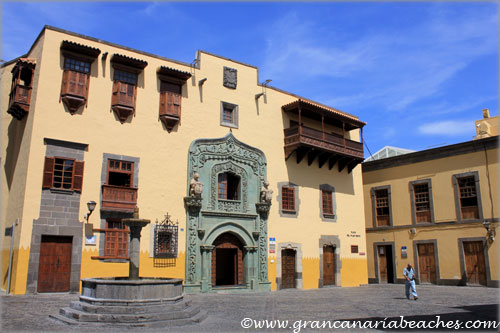 The Ermita de San Antonio Abad is a church where it is believed Christopher Columbus prayed, before his journey to the New World. It has been renovated various times, and the current building is of the 18th century.

There are three squares, which are not as big as Plaza Santa Ana, but worth having a look:

Return from Vegueta to Home page