Triana in Gran Canaria is an uncovered outdoor pedestrian shopping and dining area, and is one of the oldest neighborhoods in the capital city of the island, Las Palmas. It is located right by the main bus station (San Telmo). It was built on the banks of Guiniguada ravine, which divided the first European settlement on the island, Vegueta, from the newer one, Triana. Both areas, Triana, as well as Vegueta, are 100% recommended for anyone visiting the island, who wants to take a nice walk. 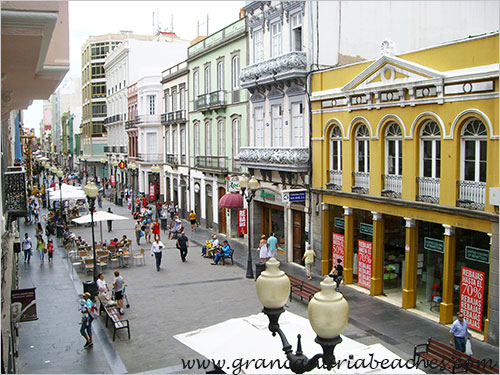 The name was chosen by local residents because of its striking resemblance with the neighbourhood in the Spanish town of Seville. Both have similar buildings, and were near the coast. Decades back, the harbor was near this street. As the city developed, a bigger port and harbor were needed, and this smaller one, was moved further down the coast, towards the north of the capital. Plenty of land was also reclaimed from the sea to build a road, and buildings. 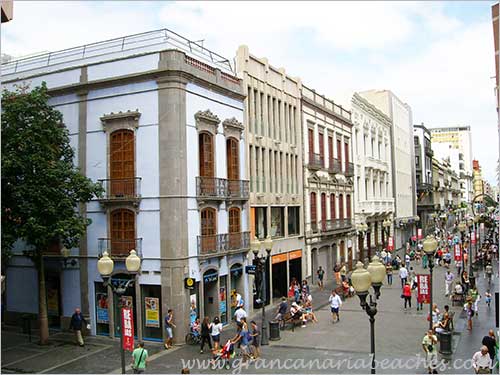 Triana in Gran Canaria is an outdoor shopping area, which is a concept created from the point of view of marketing and general management to boost sales. Almost all the municipalities of the island of Gran Canaria have designated at least one shopping area like this, which generally is on the main street. 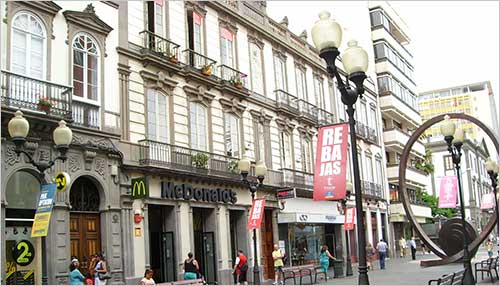 Calle Mayor de Triana, as it is usually called, is one of the oldest streets in the city of Las Palmas. In fact, it is the place where you will find the oldest shops of the city. Until the 1970’s, it was open to cars. After that, it became a street only for pedestrians, with a nice, wide, footpath, where one can shop, eat, and go for a walk. 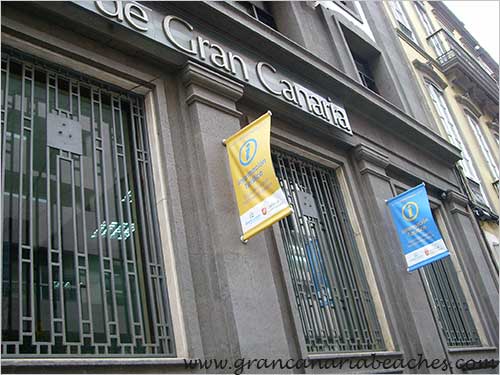 The Gran Canaria government tourism office is centrally located in the middle of the street. You can pick up free maps, and useful leaphlets about interesting spots to see

Thanks to this dozens of shops concentrated in this area, local residents of the city have chosen to shop for decades. Currently, the shopping area has expanded to the small streets around it. Many of these are also only for pedestrians. In these side streets, there are plenty of small cafes, and restaurants with tables on the street. The type of food you can have at these restaurants is Canarian, international, and even gourmet high cuisine type.

Events Held in the Main Street

On the first Sunday of each month, shops are allowed to open, and there are plenty of activities for children, such as face-painting workshops, clowns, and other entertainment. Every few months, night-time shopping events, where visitors can shop until late, as well as eat and drink in the open, are organized. Before the 6th of January, which is a big holiday in Spain (3 King's Day), a market is set up, and people can buy handicrafts, food, and other items.

How to Get to Calle Triana in Gran Canaria

This is a great option. There are plenty of buses that stop near this street.

- If you’re coming from the south of the island, Global bus line 91 or 30 will drop you off right inside the San Telmo bus station, and then it’s a five minute walk.

- If you’re already in Las Palmas, you can take yellow bus number 1 (slow bus, get off at calle Francisco Gourie, or at the Teatro, which is the last bus stop) or bus number 12 (fast bus), and get off at the main bus station stop, San Telmo.

Taxi ranks are located at either end of the street, San Telmo, and Teatro Perez Galdos taxi stands.

The difficulty lies in finding free or paid parking on the street. Although there are certain areas on the streets marked as blue zones (you will see the spaces painted on the floor with blue paint), the easy option is to set your phone GPS (Google Maps) to take you to any of the underground car parks in the area. We recommend the one next to the bus station (San Telmo Parking), and Parking Triana, located two streets behind.

The Triana outdoor shopping area has a website www.zonatriana.com. In it, we can find an updated list of shops, as well as all the events held there.

The above social media accounts are VERY active, and post updates various times during the day.